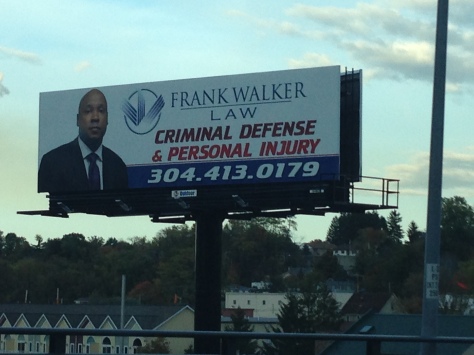 If visitors and residents in Morgantown were not familiar with Attorney Frank Walker before today, the unfamiliarity will soon fade.

Morgantown Criminal Defense and Injury Attorney, Frank Walker of Frank Walker Law, has recently brokered an agreement to advertise on the large billboard in Morgantown, West Virginia right off the Star City exit.

According to Walker, the deal was a no brainer, “I drive past that billboard every time I come to my Morgantown office for Court. The board had been sitting empty for so long, it just made sense to place my ad in front of the thousands of other people passing the exact same billboard. The location is highly visible and one of the first and last advertisements people see when they enter or leave Morgantown for a business or pleasure.”

The Billboard advertisement is also visible to visiting teams and universities that fly into Pittsburgh Airport and drive into Morgantown to battle the WVU Mountaineers.

An alumnus of WVU Law, Walker has received tons of texts and emails from old professors and law school friends once the billboard was installed. Attorney Walker’s response to all the messages is simple, “It’s great to hear from old friends and seeing the billboard get captured and shared across social media, but just don’t text and drive!”

Attorney Frank Walker of Frank Walker Law is a National Top 100 Criminal Defense Lawyer and Personal Injury Attorney with offices in Pittsburgh Pennsylvania and Morgantown West Virginia. Attorney Walker is also a member of the National College for DUI Defense and qualified as a Pennsylvania Death Penalty Defense Attorney.

If you or someone you love are facing criminal charges or seriously injured in an accident in WV or PA, contact Attorney Frank Walker immediately at 304.413.0179, 24 hours a day, 7 days a week for aggressive and experienced Criminal Defense or Representation in a Civil Case.